COMMEMORATIVE COIN FOR THE ANNIVERSARY YEAR

COMMEMORATIVE COIN FOR THE ANNIVERSARY YEAR 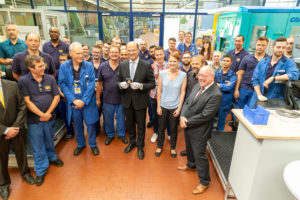 Today’s Bavarian State Mint was founded in 1158 when Heinrich the Lion conferred the right to mint coins on Munich. In particular, the task of minting cash may only be performed by five mints in Germany, which in addition to Munich, includes Berlin, Hamburg, Stuttgart and Karlsruhe. For 860 years, coins for payment transactions as well as medals as collector’s items for customers in Germany and abroad have been produced here. As one of the largest German mints, the Bavarian State Mint stands for modernity and innovation and was key in the development of unique polymer technology.

In 2017, some 279 million federal coins and 312 million foreign coins were minted at the Bavarian State Mint. The total annual capacity of one billion units roughly corresponds to loading 450 trucks with a total permissible mass of 40 tons each. With 55 employees, the Bavarian State Mint generated net profit of €3.0 million in 2017, with sales of €16.9 million.